Trinity has been operating and producing offshore the West Coast of Trinidad since 1999. The assets are operated under two licence agreements (the PGB and BM Licences) with the Ministry of Energy and Energy Industries within the Gulf of Paria.

The above summary highlights the robust economics of the West Coast operations as a result of stringent cost control. 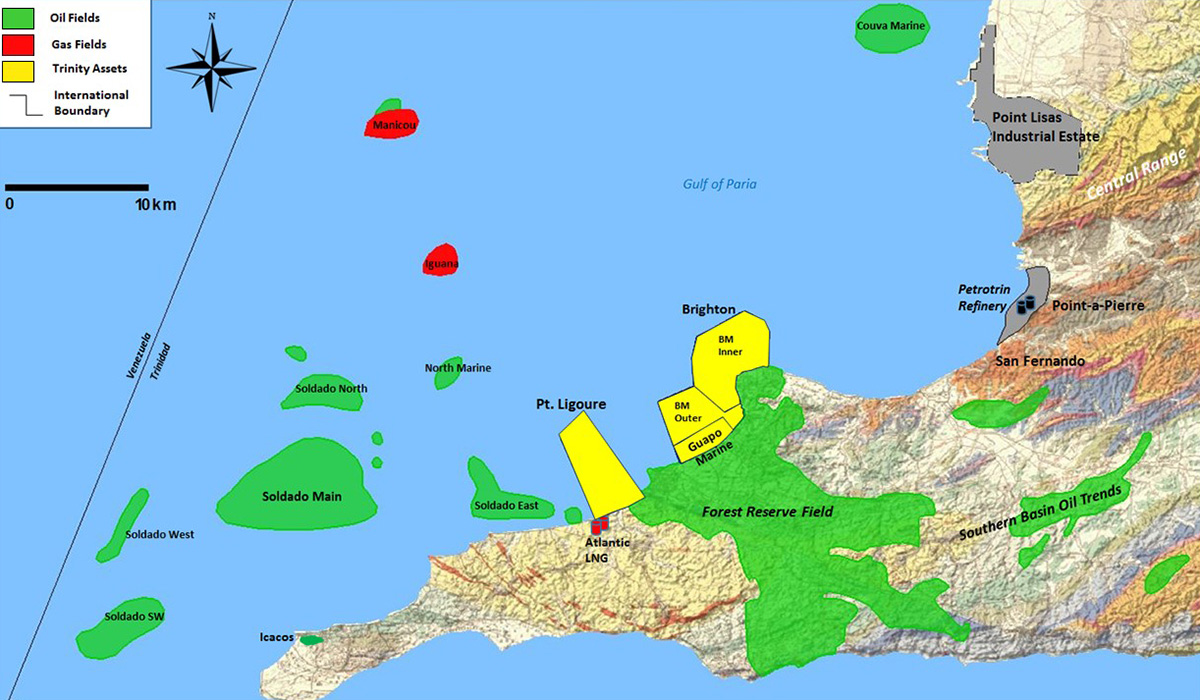 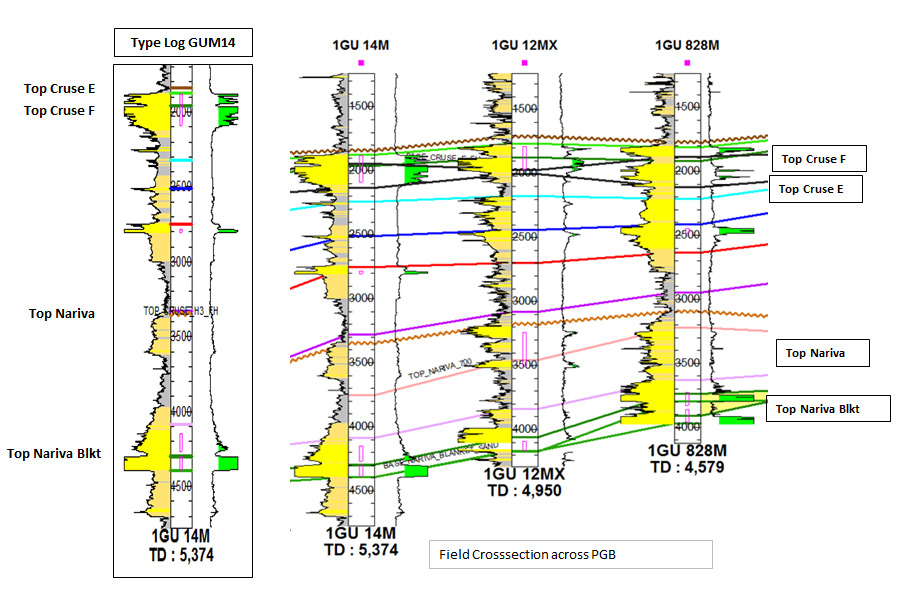 The PGB and BM Licences are located in the shallow transition zone/near shore coastal areas of the Gulf of Paria, downdip of the La Brea Pitch Lake and East and South-East of the Petrotrin operated Soldado and North Marine Fields.

The blocks within the PGB and BM Licences have been actively explored since the 1960’s when the deeper Nariva Sands were discovered below the shallow Cruse Sands in wells South of the BM Field. These fields were subjected to uplift due to thrust faulting from the North-West resulting from the Caribbean plate eastwards movement. The faults are also proven hydrocarbon migratory paths for the oil sourced from the Cretaceous age Naparima Hill source rocks. 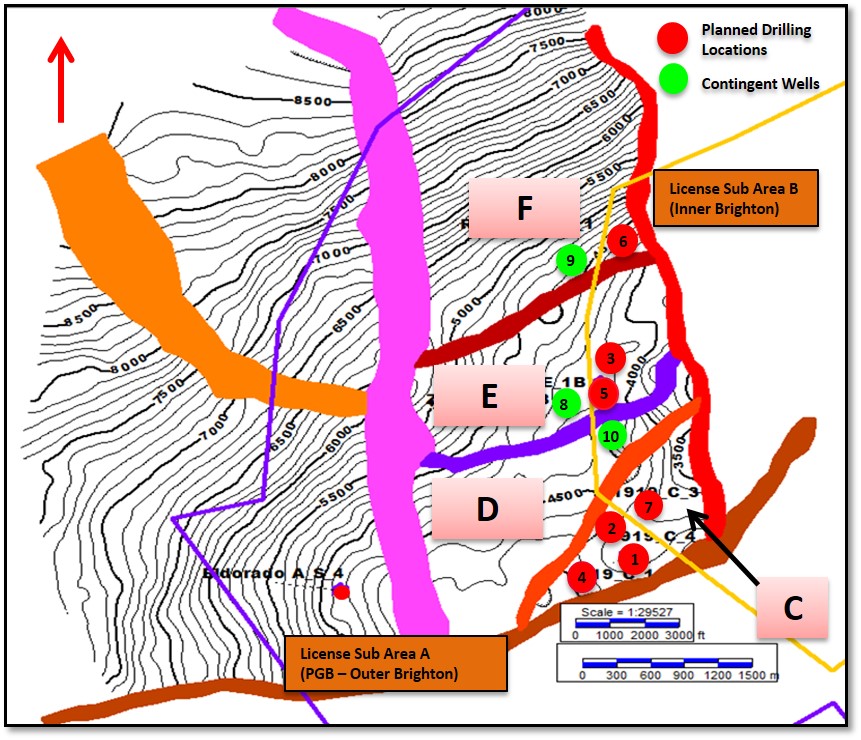 The PGB Blocks lie within the South-West part of the Southern Basin, off the Western Coast of Trinidad in the Gulf of Paria, adjacent to Trinmar’s East and North Soldado Field. The blocks straddle the Los Bajos Fault. The local geology around the PGB Blocks is characterized by large, Southeast-verging anticlines and related, antithetic back thrusts. These were cut and offset by the right lateral, strike-slip motion along the North-dipping Los Bajos Fault. The reservoir rocks in the Point Ligoure Field are within the Cruse, Forest and Manzanilla formations and they are of Upper Miocene to Lower Pliocene in age. Seismic coverage for the PGB Blocks consists of older 2D and 3D surveys merged to provide almost complete coverage of the area with a more recent 3D coverage over the Brighton Marine Inner Block that provides overlapping data coverage.

The PGB Block has ongoing oil and gas production. Wells within the PGB Blocks have produced in excess of 6 mmbbls of oil to date. The PGB Blocks lie between the production at Brighton and East Soldado Field. The Point Ligoure Field is a relatively small oilfield, approximately 1732 hectares and was first exploited in 1958. To date, the field has produced over 4.5mmbo. Production within the Point Ligoure Block commenced in the 1950’s with long-reach, highly deviated wells drilled from onshore into offshore traps along the South side of the Los Bajos Fault. On the North side of the Los Bajos Fault in Point Ligoure, hydrocarbon bearing sands have also been tested with recoveries of free oil and gas from a couple offshore platforms. The prospect trends identified here have also been tested from platforms immediately West of the block in the East Soldado Field. To date, seventy eight (78) significant tests have been drilled in the Point Ligoure Block. In 2017, the Point Ligoure Block produced approximately 101 bopd from two (2) wells South of the Los Bajos Fault.

The Brighton Marine Inner field is located slightly offshore within Trinidad’s shallow 25ft to 70ft Gulf of Paria waters and is comprised of a thrusted anticline cut by younger strike-slip faults. The field produces hydrocarbons from a number of fault-separated compartments. Hydrocarbon production is proven both on the crest of Brighton anticline and also within down-thrown fault compartments.

Structurally down-thrown flank areas include some of the larger cumulative production wells due to decreased structural complexity and lower drilling density. Reservoirs include continental slope and basin floor deposits of the Miocene Nariva Formation fed primarily by the proto-Orinoco Delta. The Nariva is unconformably overlain by the Pliocene Talparo/Springvale formations on the crest of the field and the Brasso formation on the flanks. Cretaceous units are penetrated by three (3) wells in the field, one of which had production. The highly laminated nature of sands and shales of these deep water turbidite deposits enhance the sealing potential within the fault blocks. Brighton Marine Inner field produces high-quality 26° to 46° API crude.

The oil is stratigraphically trapped within the turbidite Nariva Sand but structure plays a critical role for oil accumulation in the updip areas. In Brighton Marine, oil within the more continuous Nariva Blanket Sand are trapped structurally within the Anticlinal closure.

From 1951 to 1957 Brighton Marine’s hydrocarbons were accessed from long-reach wells deviated from eleven (11) land pads. Between 1957 and 2001, wells were drilled as both stand-alone wells and from nine (9) Marine Platforms. Several new wells were drilled into the field by Venture in 2001/2002, including the highly prolific ABM-151 well with cumulative production exceeding 500,000 barrels of oil. All drilling prior to 2001 was without the benefit of 3D seismic data. The current interpretation benefits from two (2) 3D seismic surveys: one acquired in 1997 and the other shot in 2009. The production mechanism is solution gas drive with artificial lift via gas lift. No long term secondary recovery water flood programs are currently in place. Production for 2017 averaged 110 bopd. This production comes from 50 (most being intermittent producers) of the 316 wells in the Greater Brighton field area.

Trinity’s recommended Brighton Marine Inner development strategy is to target the West flank fault Blocks C and E. These areas are relatively undrilled since they could not be easily accessed from the fixed marine platforms during early field development by Texaco. In addition, these areas demonstrate good oil recovery per well. The flank of Brighton is less structurally complex than the crest of the field which is likely also contributing to higher per well recoveries. 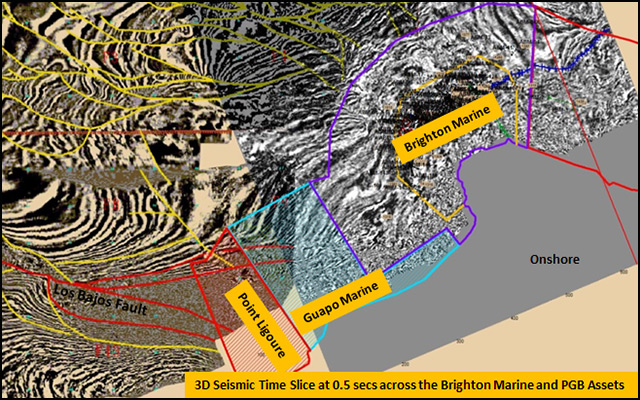 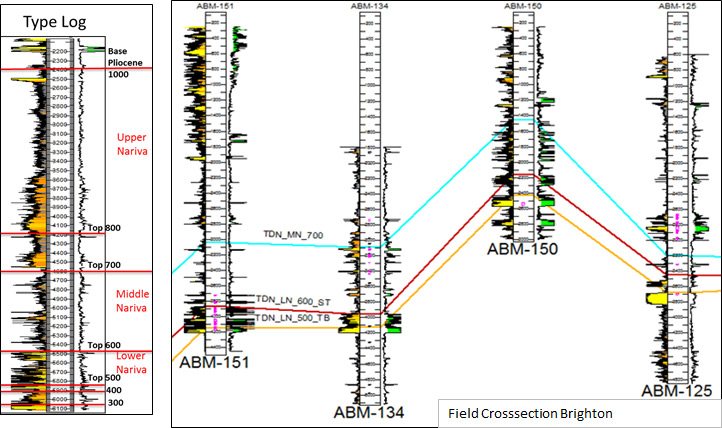