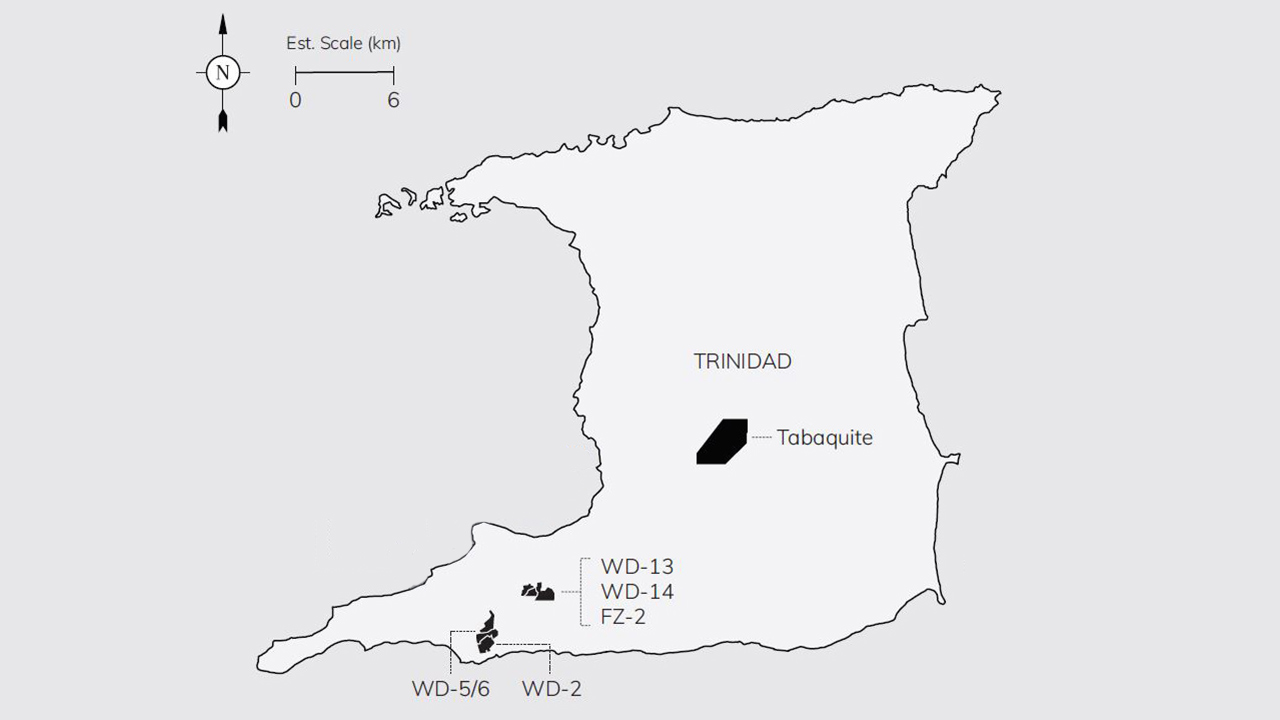 Trinity has been operating and producing onshore in Trinidad since 2007 and holds 100% operated working interest across all of its onshore assets by way of six Lease Operatorship Agreements (LOAs) and the Tabaquite Farmout Agreement within the southern basin and central range.

The above summary highlights the robust economics of the Onshore operations as a result of stringent cost control.

The H1 2019 performance metrics summarised above reflected an average oil price realisation of US$59.1/bbl. Trinity’s strategy is to increase value realisation from the Onshore portfolio with the combination of higher production and a largely fixed cost base enabling a leverage effect on profitability. 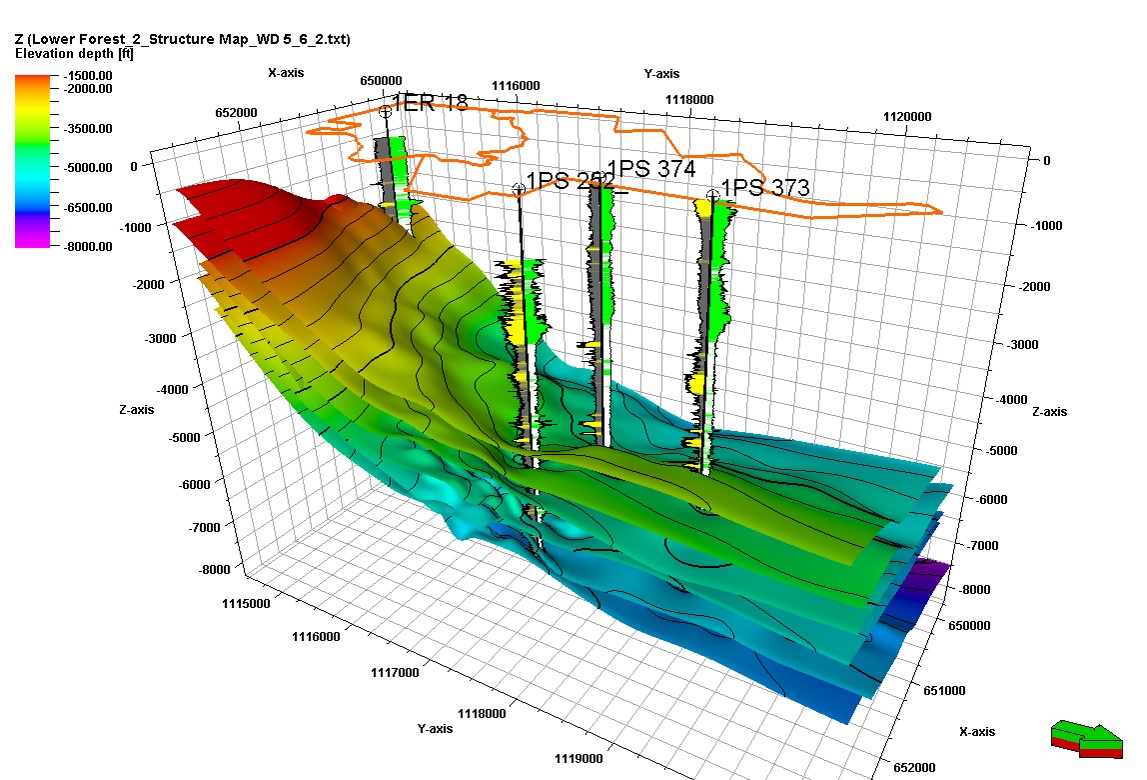 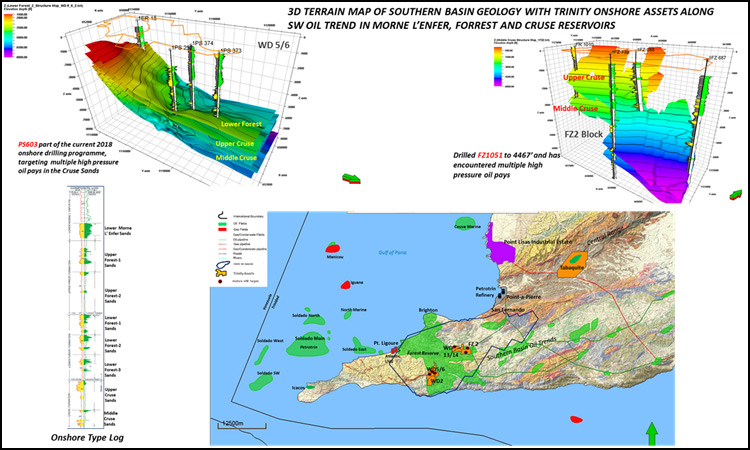 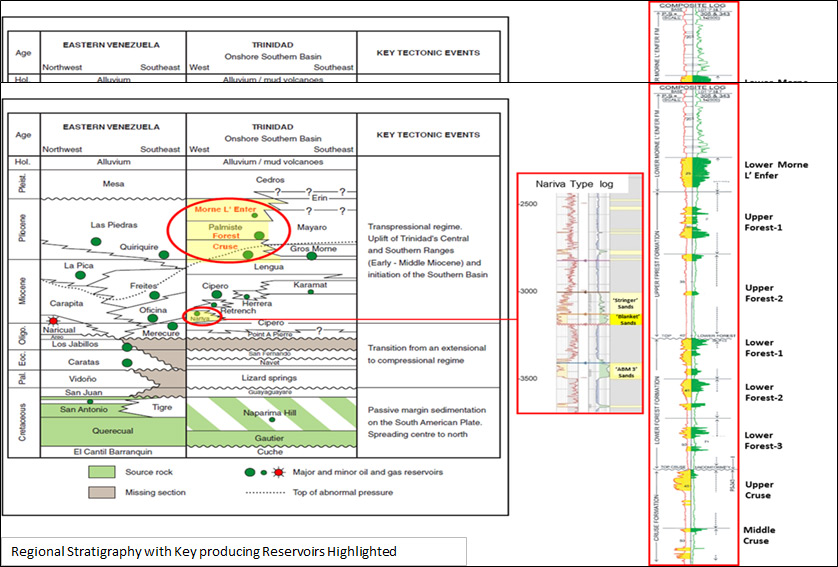 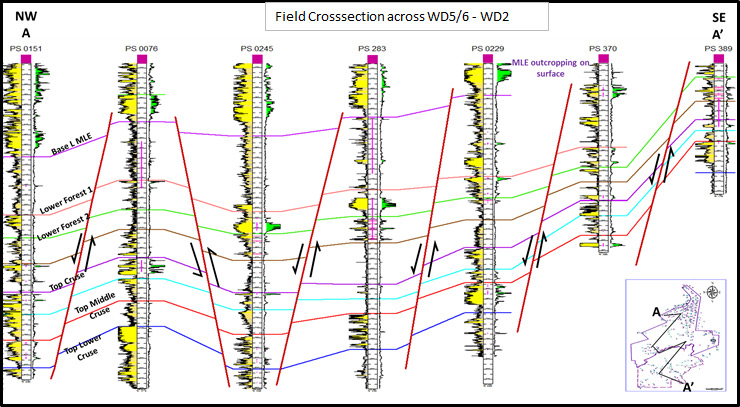 The Fyzabad Oilfield in South Trinidad, was discovered in 1920 by Apex (Trinidad) Oilfield Limited, now the national oil and gas company, Petroleum Company of Trinidad and Tobago Limited (Petrotrin). The principal producing sands are those of the Cruse and Forest Formations which are Upper Miocene to Lower Pliocene in age and deltaic in origin. The API gravity of crude from these sands vary between 22° and 27°. Porosities average 33% in the Forest, and 29% in the Cruse. Structurally, the field is underlain by the Western extremity of the E.N.E. – W.S.W. trending Debe-Wellington Anticline which plunges gently westward and is cut by a series of extensional faults. These faults compartmentalise the fields and are sealed at most reservoir levels. Regional seals and stratigraphic marker horizons across the Forest Reserve Field are the Upper Forest Clay (BUFC) and Lower Forest Clay.

The WD-2 and WD-5/6 Blocks are located onshore in South-West Trinidad approximately 20 miles South-West of the city of San Fernando, in the Southern Basin, which consists of productive clastic sediment reservoirs of the Cruse, Forest and Morne L’Enfer Formations. They form part of the Southwestern extension of the Palo Seco and Erin Oilfields. The WD-2 Block lies on the North flank of the Southern Range Anticline (SRA), which is interpreted to be a fault propagated fold structure formed by a series of thrust faults emanating from the North/North-West. Mud volcanoes are associated with these faults where they sometimes break through to surface. This generally occurs in the crest of the anticline, South of the block. The WD-5/6 Block is immediately North of the WD-2 Block, on the South-Eastern flank of the Erin Syncline which trends NE-SW and plunges to the South-West. These blocks also lie South of the Los Bajos fault which trends NW-SE and is a right lateral strike slip fault. The Blocks are structurally compartmentalised by a series of NW/SE and NNE/SSW trending normal faults. The Upper Morne L’Enfer (UMLE) outcrops over the Northern (WD-5/6) areas, whereas the Lower Morne L’Enfer outcrops over the Southern area (WD-2). The Lower Forest and Upper Cruse are the most prolific producers across the blocks. The API gravity of crude from these sands varies between 20° and 31°. Porosities average 30% in the Lower Morne L’Enfer, 30% in the Forest, and 26% in the Cruse.

The trapping mechanism in these fields is a combination of both stratigraphy and structure. Both North and South flanks of the anticlines provided extensive area from which oil and gas migrated updip into lenticular sands on the crest and upper flanks of the anticline. Minor faults which are common in the field act as seals to reservoirs, since oil and gas are found downdip of faults below water levels of the same sand in adjacent blocks. In addition to the above trapping mechanisms, unconformities at the tops of Forest and Cruse Formations may have acted as seals, trapping oil and gas in the sand reservoirs below them. In WD-2 and WD-5/6, mud diapirs further compartmentalised the fields and also support pressured reservoir zones.

Trinity’s interest in the Tabaquite field is via a Farmout Agreement. The field is located within the Central Range oil trend.

The Tabaquite and Johnson Road fields are located in the Naparima Thrust Fold Belt, which forms part of the Central Range. This thrust fold belt is bounded to the South by the Nariva Thrust Fault and to the North by the Central Range Thrust Fault. Within the belt, at least five (5) sub-parallel thrust faults have been recognised that were formed in response to mid Miocene compression.

The Tabaquite field was discovered in 1911. The crude that was produced was reported to have been of good quality, with a relatively high API gravity.

The Blanket Sand at the base of the Nariva Formation forms a relatively thick unit (up to 100ft) which is laterally extensive across the Tabaquite lease and along strike into Brighton Marine Field. Internal heterogeneity within the Blanket Sand is common, indicating that it comprises multiple stacked thin beds. The overlying Stringer Sands comprise thinner beds of sandstone intercalated with shale.

Locally sand/shale packages are correlatable but individual sands are unlikely to extend laterally for more than a few hundred meters in dip sections. The API gravity of crude from the Nariva and Stringer Sands varies between 28° and 40°. Porosities average 15% in the Nariva Sands and 12% in the Stringer Sands. 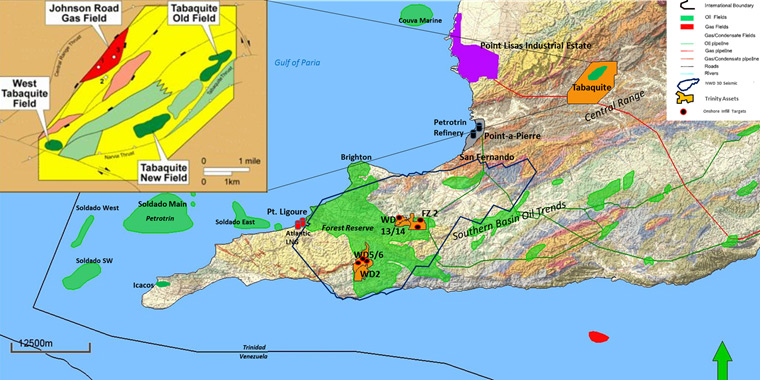 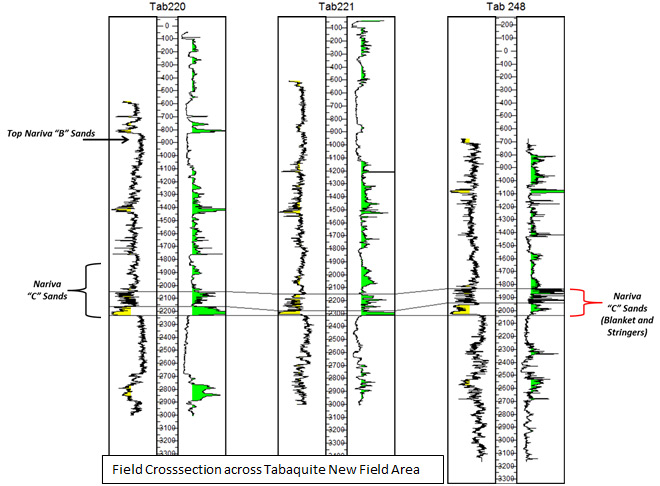