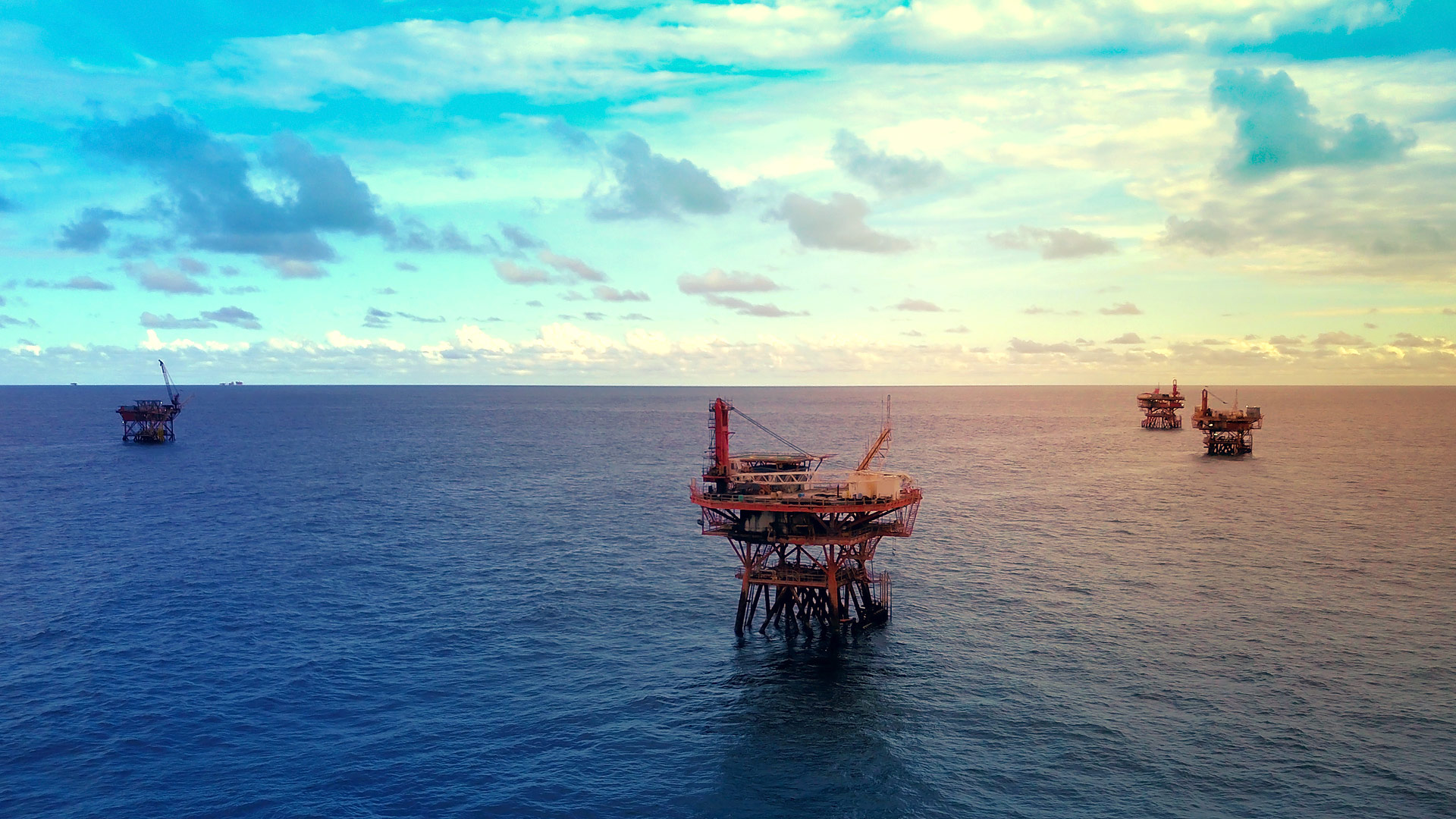 Trinity has been operating and producing offshore the East Coast of Trinidad since 2013. The assets are operated under a licence agreement (Galeota Exploration and Production Licence) with the Ministry of Energy and Energy Industries within the Columbus basin.

The above summary highlights the robust economics of the East Coast operations as a result of stringent cost control.

The H1 2019 performance metrics summarised above reflected an average oil price realisation of US$59.1/bbl. With significant oil in place across the basin and low recovery to date significant upside potential resides from the deployment of existing and new technologies and approaches to further develop the Trintes field and the development of TGAL. 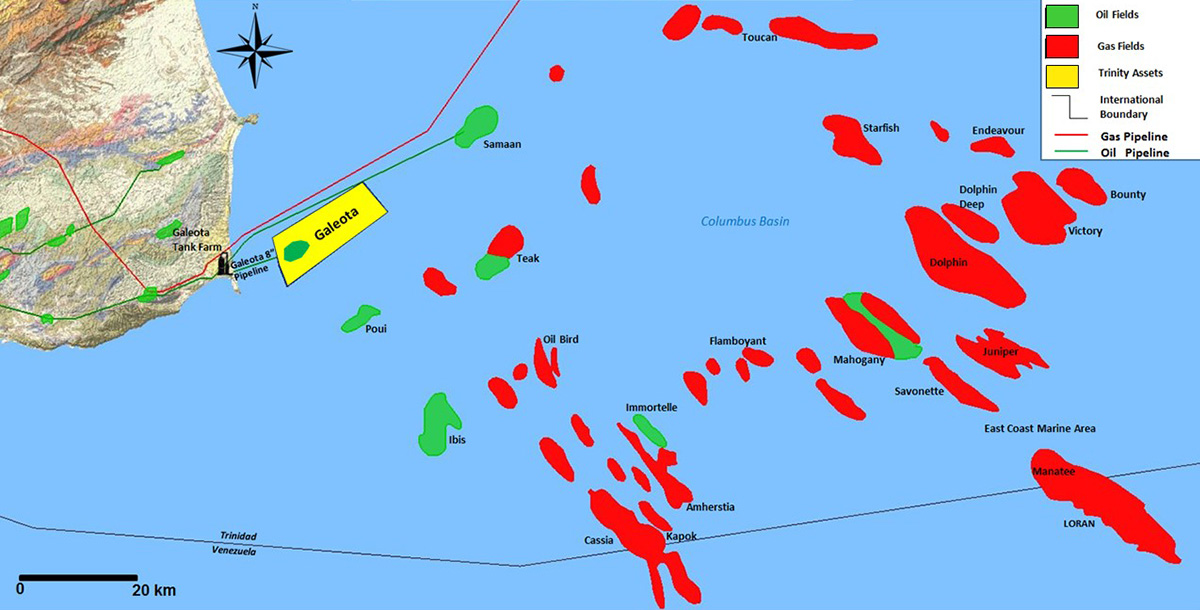 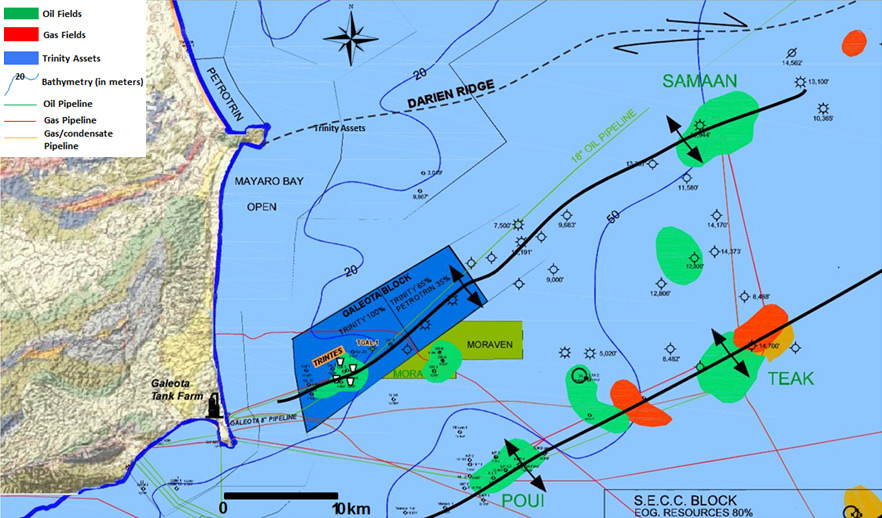 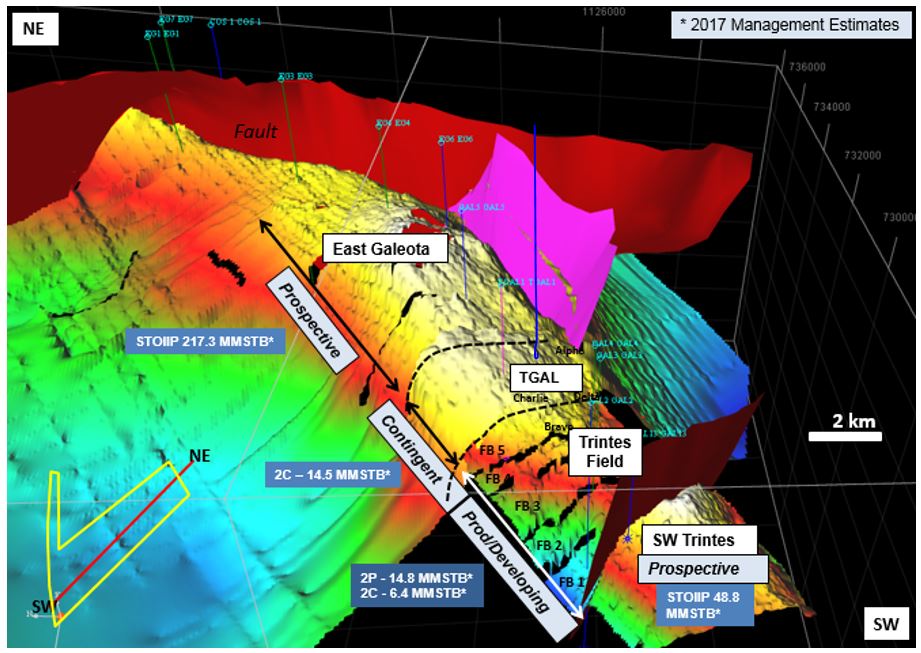 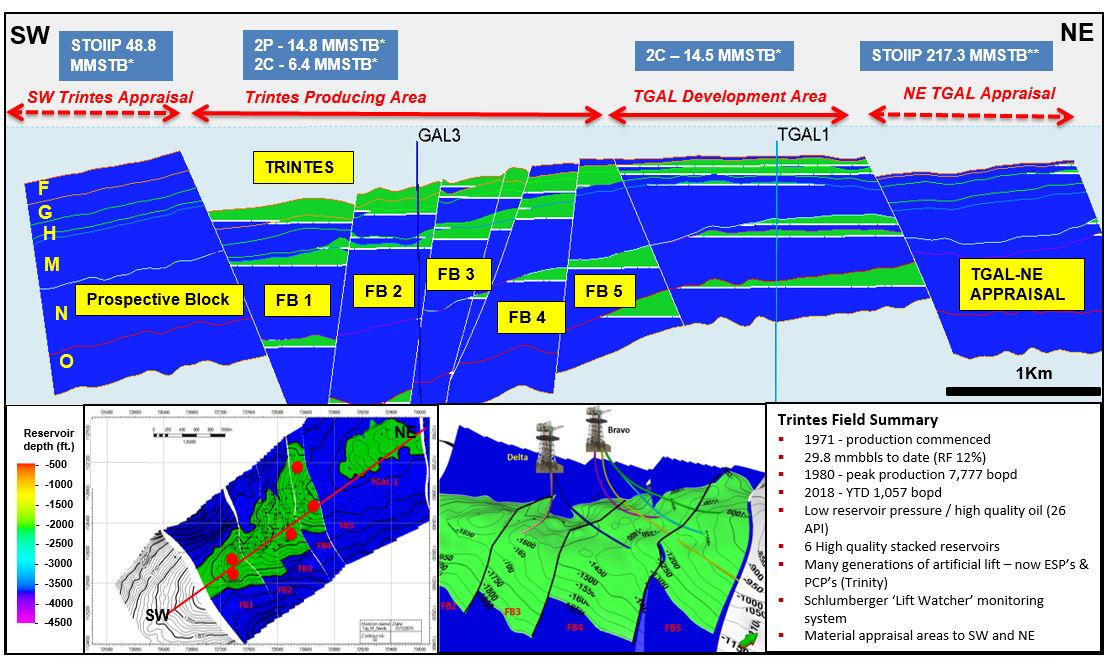 The Galeota Exploration and Production Licence area covers 121.6 km² in the shallow waters (17m to 45m) of the Columbus Basin off the East Coast of Trinidad.

The Galeota Block is within the established oil play of the Columbus Basin and is surrounded by Teak, Poui and Samaan mature oil fields. Exploration and development activity in the Galeota Block began in 1953 with the acquisition of seismic data, and the subsequent drilling of Galeota-1 exploration well in 1961. Ninety two (92) wells (of which approximately ⅔ are development wells) have since been drilled, targeting Pliocene and Pleistocene age reservoirs. Although several hydrocarbon discoveries have been made within the lease, only the Trintes Field, discovered in 1963, was considered to have encountered sufficient volumes to justify development at the time.

The Galeota Block is dominated by the Galeota Anticline, which is the offshore Eastern continuation of the complex Southern Range Anticline. It is a NE-SW trending anticline that plunges towards the North-East.

The Orinoco delta has been a major source of sediment input into the area since the Miocene, continuing through present day. Thick deltaic sand and shale deposits of Pliocene and Pleistocene age underlie the licence. Sediment thicknesses of more than 12,000m are estimated to have been deposited since the Pliocene in the deepest parts of the basin, and sand with excellent reservoir qualities (porosity up to 30%; permeability greater than one Darcy) is widespread. The sand units are subdivided lithologically in the West Galeota area into, from oldest to youngest, the Gros Morne W, V, T, S, P, O, N, and M Sands, and the St. Hilaire H, G, and F Sands.

Since the Trintes Field came on stream in 1972, an estimated 30.0 mmbbls of oil has been produced via four (4) production platforms (Alpha, Bravo, Delta and Charlie). By the end of 1982, production had peaked to around 5,500 bopd.

Recent remapping undertaken by Trinity has interpreted the reservoirs within the area to be structurally compartmentalized from the surrounding blocks NW-SE trending normal faults.

Base production for this field is maintained through routine recompletions and workovers.

The Trintes Field in 2017 produced an average of 960 bopd (H1 2018: 1,046 bopd) with a continuing platform-based rig programme to workover the existing well inventory. Currently twenty three (23) wells are producing from the Alpha and Bravo platforms.

The trapping mechanism in these fields is a combination of both stratigraphy and structure. Both North and South flanks of the anticlines provided extensive area from which oil and gas migrated updip into sands on the crest and upper flanks of the anticline. Minor faults which are common across the Trintes Field act as seals to reservoirs, since oil and gas are found downdip of faults below water levels of the same sand in adjacent blocks. The reservoirs are supported by an active water drive mechanism.

Early phase development of these fields included the drilling of a high density of wells in the Central crestal area of the anticline in close proximity to the four (4) platforms. Trinity has undertaken a thorough reservoir modelling exercise from extensive historical appraisal and development drilling which resulted in a comprehensive database of formation depths, thicknesses and petrophysical properties. This has been supplemented with 3D seismic data and recently reprocessed 3D OBC seismic data by Trinity.

To date F, G, H, M, N and O Sand remapping of the Trintes Field has been completed. It has been identified that there are un-drained reserves in each subject fault block from the mapping of these shallow reservoirs. As such, additional development targets were identified. These wells will be drilled as horizontal to high angle wells to maximize targeted pay zones to achieve higher production rates and the ultimate cumulative production from the mapped fault blocks.

Five (5) exploration wells drilled between 1964 and 1985 discovered hydrocarbons in multiple stacked reservoirs. These five (5) discoveries were not developed because they were considered to be non-commercial at that time. The data derived from the exploration campaign was utilised in the Trintes Field development.

Multiple targets have been identified in TGAL-1, to be drilled during the first development phase, from the first of possibly multiple conductor supported platforms. Additional targets in the N and O Sands in the Eastern most undrained fault in Trintes will also be drilled from the same platform. 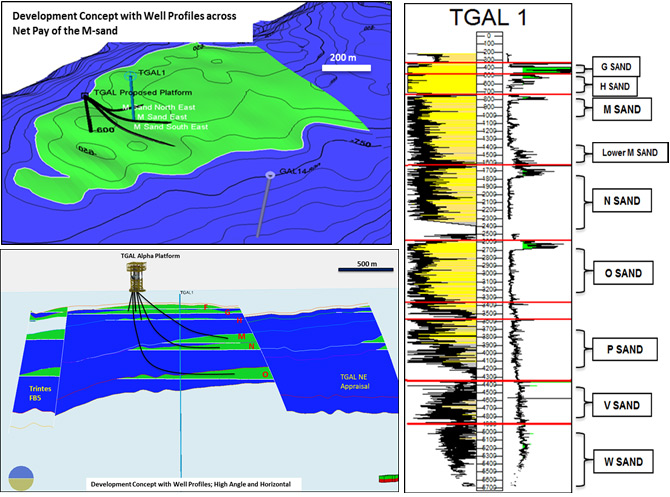 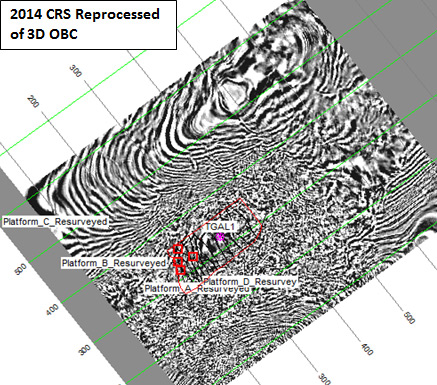